Le musée Yves Saint Laurent in Marrakech will open on October 19th, a few days after the one in Paris.

At the movies:
A Moroccan-American makes movies in New Orleans:
http://aujourdhui.ma/culture/cinema/qanir-represente-le-maroc-au-festival-new-orleans-film

Everyone wins in Toulouse!
Cruising the Canal du Midi
Invasion of the Ripe Tomatoes
Recipe
Presentations
News of Morocco and beyond
Links of interest
North San Diego County discoveries
Kitty contributes to The Vista Press
A French wedding menu

My last Chronicles described my travels to France in April to reconnect with childhood friends from Casablanca. We met up in Paris (1st part), Vienna, and Nice. Next in store is TOULOUSE. ( I have so much more to say about Paris, that Ill devote my next Chronicles to the rest of my Parisian interlude) 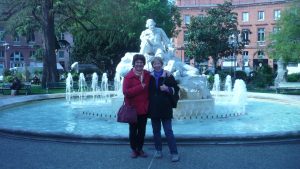 Dateline TOULOUSE:
Liz was the friend I reconnected with in what the French call “La Ville Rose” so named for its abundance of red brick buildings (in Morocco, we call Marrakech “The Pink City” as well).

Liz and I both attended the lycée in Casablanca, and she hosted the very LAST party I attended before I set off for Tangier with my mother and brother in August 1964 to catch the boat that would bring us to the US.

A few decades later, my friend was waiting for me at the charming Blagnac airport, all smiles, and looking much as I remembered her (and she immediately whisked me off to a bakery to sample fenétra, a special bread. What a friend! 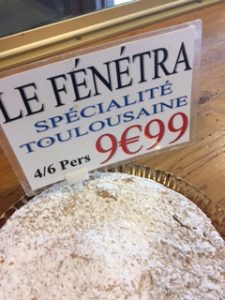 Many of my lycée classmates headed to Toulouse to go to university. Fifty years on, I wished I had gone to visit them at the time. Students make up 1/10th of the population in this town of 900,000 inhabitants.

Toulouse, aka (as well) la Cité des Violettes, straddles two major waterways: the wide river Garonne, one of France’s longest. When the sun is out, hundreds of étudiants sun themselves on its grassy banks. And the placid, 17th century, man-made Canal du Midi, that stretches between the Garonne and the Mediterranean to the west and the Gironde estuary near Bordeaux. More important for gourmets, is the fact that Toulouse is the navel of the universe for cassoulet, and for foie gras, which I sampled in numerous iterations over three days —— along with Liz’s home-made cassoulet, stuffed with the region’s famed saucisses.

But first things first: We hot-footed it out of the spotless metro the next morning, onto Toulouse’s wide Alléees Jean Jaurès in the centre ville, near Les Américains, a café bistrot ideal for people watching. Liz was on a mission: to reach le marché Cristal on the Blvd de Strasbourg before closing time. For a list, seehttp://www.toulouseinfos.fr/pratique/decouverte-de-toulouse/9264-marches-toulouse.html)

I tried not to trip as I craned my neck to look up at the handsome brick buildings along the tree-lined boulevard. In minutes, we were engulfed in the colorful sounds of the daily marché .Asperges! Tomates! Champignons! Poulet de Ferme! And some Moroccan: Labès, madame! Many vendors hailed from North Africa. Slightly breathless, and loaded down with a cabas (bag) filled with produce, we took a seat at a table outside the Rose de Tunis café, a few blocks away. Nothing like a glass of piping-hot mint tea and a honey pastry to set you back on the right track.

Thus fortified, we boarded the free shuttle that crisscrosses downtown,along the narrow streets,  lined with universities and historic sights: the imposing fifth century basilique Sainte Marie de Toulouse or Notre Dame La Daurade, with its black Madonna; the Gothic style Couvent des Jacobins started in 1230, with its palm-tree shaped pillars. We got off at the Office du Tourisme in the Donjon du Capitole, which borders the football field-size Place du Capitole not far from the 4th century Eglise St Pierre des Cuisines. The cuisine refers to the Latin “coquinis” or food stalls that once occupied the neighborhood. St Pierre des Cuisines is the oldest church in Southwest France — there you have it, even saints think about food.

A few zigs and a zag later, we reached the banks of the Garonne. On this glorious day, students were out en masse, sunning themselves on the lawn, or dangling their feet above the water. Liz had more for me to see. She had me cuddle up to the statue of local songwriter Claude Nougaro, one of my teenage heartthrob. 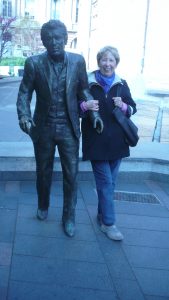 My friend needed a ripe wheel of Brie, and knew we would find the perfect fromage at SENA FROMAGER, across the street from the Marché des Carmes, the historic covered market. SENA has been in business for 6 generations. Indeed, the young vendor behind the counter was busy upholding tradition, and handing out samples. http://www.senafromager.com/contact.html. 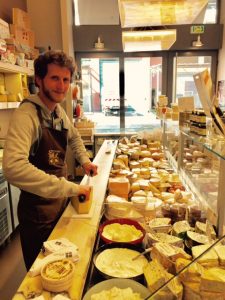 We needed to make one more stop before taking the metro home — at the Terre de Pastel (www.terredepastel.com) a charming magasin that sells everything related to the violet, L’Or Bleu de Toulouse (the Blue Gold of Toulouse) the city’s symbol, imported centuries ago from the palace of the Sultan of Constantinople. I purchased tins of candied violets, the same delicate treats that I once received from my French grandmother. 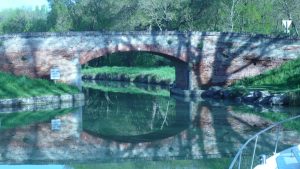 My friend had saved the best (among the best) for last: a day’s cruise on the Canal du Midi. Her friend Bruno’s flat-bottomed péniche is the classic way to explore one of France’s most scenic waterways. I was living a dream, navigating the canal at 3 miles an hour, keeping pace with the cyclists waving from the shore, and gliding under the dappled shade of an arch of centuries old plane trees. Liz had planned lunch along the canal, near the lock at the Ecluse du Castanet (http://www.l-ecluse-de-castanet.fr). I stepped out of my dream into a postcard: a flower-filled chalet, once the home of the lock keeper, now a restaurant on the water. My Salade Océane would have fed four. Did I mention more foie gras? And scallops in garlic butter? I waddled back onto the péniche, and let the lapping of the water induce a gluttony-induced nap.

One of the peculiarities of this man-made ribbon of water is that the CANAL flows OVER the freeway . . . What a way to escape the busy traffic below. 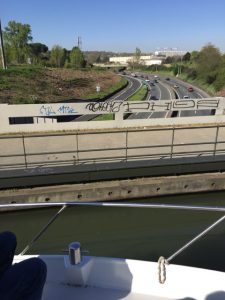 I am already plotting to return to La Ville Rose.

RECIPE OF THE MOMENT
Tomates, tomatoes, pomodori, matisha=BLISS this month