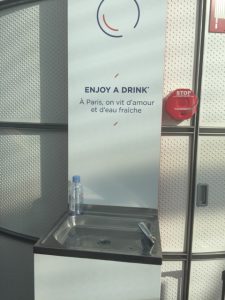 A Note from Kyrgystan

News of Morocco and beyond

(Mint Tea and Minarets: a banquet of Moroccan memories)

The Kasbah Chronicles were on hiatus for a month, when, this being a banner year for me, I took myself to France for three weeks. It was time to reconnect with aging family members, and with grade school chums from Casablanca, and meet up with girlfriends, one of whom I hadn’t seen in at least 40 years. As “best” school pals would, we simply picked up where we had left off.

Since my cousin lives ATOP the Gare Montparnasse (the rooftop is a public park!) I had plenty of opportunities to step inside the gare. This is what I observed:

Quelle idée géniale! Two cyclists powering their cell phone while on an exercise bike. I burst out laughing and the two cyclists thought I was the nutty one. And then, there was a public piano: 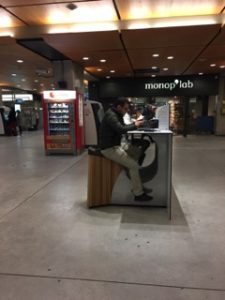 I joined the line forming in front of Chez Paul sandwicherie inside the main hall. This I did, once, twice, three and four times over the course of a week. I had just stumbled onto one of Chez Paul’s internationally known sandwich shops. https://en.wikipedia.org/wiki/Paul. I was instantly hooked with a CRUNCHY baguette sandwich filled with a generous helping of jambon de Paris. And his fresh Tarte à l’Abricot. Chez Paul operates franchises in Casablanca, Qatar, Koweit, and Portugal among others. Best of all, you will find Chez Paul inside the terminals at Charles de Gaulle airport, a most appealing alternative to the overly priced and tasteless pseudo Chinese, Italian, or Japanese fast-food.

The other craze from Paris to Vienna to Toulouse is sushi! Every hole in the wall restaurant features sushi on the menu (A sushi and a dim sum bar at the staid Galeries Lafayette? Oui madame.) And POKE. POKE?! Hawaii’s national dish! In that regard, I ask the same question I do about argan oil: Argan argan everywhere, but where does it come from (a tree traditionally is endemic to Morocco’s southern regions.) How can the world’s oceans produce ENDLESS amounts of FRESH RAW FISH??? Je ne sais pas. Make sure you know its source. http://www.ozy.com/good-sht/how-paris-put-its-spin-on-this-hawaiian-dish/

Non merci: When in France, feed me cassoulet, a butter-logged croque-monsieur, frites, fresh baguette, a squishy baba oozing with Martinique rum (such as the one at the Brasserie Montparnasse, where the waiter brought us a liter of rum, and told us to finish it off by pouring the contents on two babas.) Our waiter was a transplanted Camerounais! Who said Parisians were unfriendly? 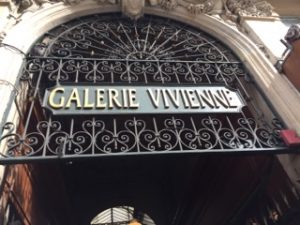 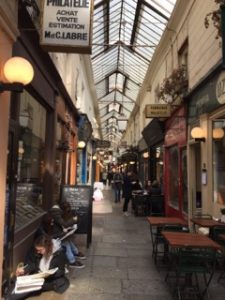 My first “retrouvaille” was with my dear friend Roselyne Rahoule, who happens to be our neighbor at Dar Zitoun (and in former times, in Casablanca.) Roselyne had planned a special day that included browsing through Les Passages Couverts de Paris. What a treat. Les Passages consist of a series of nineteenth century commercial “alleys” bisecting buildings, and topped with gorgeous glass domes. Most of them grace the right bank near the Grands Boulevards. Up to 150 passages existed in the late 19th. https://fr.wikipedia.org/wiki/Passages_couverts_de_Paris and http://www.lexpress.fr/diaporama/diapo-photo/tendances/voyage/paris-top-10-des-plus-beaux-passages-couverts-parisiens_1239783.html

What a perfect stroll on a rainy Parisian day. The sumptuous Galerie Vivienne which took more than 2 hours to explore, with unique boutiques, and Pakistani, Moroccan, Thai, sushi bars, and yes, even an authentic Parisian bistro. A real bistro lunch of Noix de St Jacques in garlic butter and Magret de Canard at Le Café du Commerce (caféducommerce.com) provided the icing on le gâteau. Among the most enticing boutiques was Emilio Robba’s (emiliorobba.com) magical display of artificial plants and flowers. In nearby Passage des Panoramas, the charming Hemingbird (sic) lured us inside with its delightful paper goods. We got to chat with the owner, who, wouldn’t you know, hailed from Chile! Merci Roselyne for these memorable retrouvailles (her husband, Abderrahmane Rahoule, is one of Morocco’s best-known contemporary artists.)

Paris’ annual LIVRE PARIS, Salon du Livre de Paris, book expo, beckoned a day later. Emmanuel Macron, possibly France’s next president, made a brief appearance. More important, I met with a publisher regarding my French translation for Mint Tea and Minarets, Le Riad au Bord de L’oued. Hope springs eternal. I am determined to see that book published in French! Among many treasures I obtained a brochure listing the Federation du Village du Livre en France, villages and towns all over France that specialize in bookstores of all genres.

My next retrouvailles took me to Normandy to meet up with Pat, who was our neighbor in Casablanca in the late 1950s. With Pat and her husband Jean Dominique I discovered Caen and its environs, where my friends Pat and Jean-Dom took me on an aerial tour of the Normandy beavhes in their home-built ORION plane. An excursion to remember! 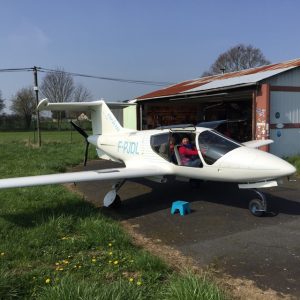 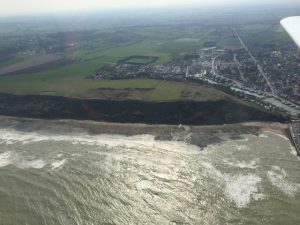 Behind the Tour Montparnasse, a stone’s throw from the Gare, lies the atelier/Musée Bourdelle, a new one for me. Antoine Bourdelle was a sculptor who created many a public monument. http://www.bourdelle.paris.fr/ The unusual juxtaposition of Bourdelle’s work and Balenciaga’s signature BLACK evening dresses proved arresting. http://www.bourdelle.paris.fr/fr/exposition/balenciaga-loeuvre-au-noir (until July 2017)

Buses: I used the Flexbus and the Ouibus to get from Paris to Normandy, and return from Caen to Charles de Gaulle airport. JUST NINE euros (about USD12) buys a two-hour, relaxing bus ride from Paris to Caen, or return. Depart from the somewhat off putting La Défense, or Porte Maillot. You can even purchase a ticket online. Check out the bus companies’ websites.

Metro: The Paris metro is overcrowded and lugubrious, yet the most convenient means of transportation. I got lost in the underworld maze of the Gare St Lazare, and I wasn’t the only one! So I latched on to a school of equally aimless lemmings, got on the wrong train, did an aller-retour only to return where I started from, only to locate my exit on the opposite side of the corridor. TAKE THE BUS! A Metro ticket buys you a seat on any bus. What a relief to remain above ground and catch glimpses of the Eiffel Tower, the Champs Elysées, the Opera, and the Louvre MOBBED, MOBBED, MOBBED, with tourists. Thank goodness I didn’t feel I had to visit it once again.

CELL PHONE quandary:I have an iPhone, but I am very slow on the uptake. I purchased a Verizon plan for 30 days’ overseas service. I managed to connect to my cousin’s wi-fi in Paris (I travelled with 3 phones one for Morocco, one for Chile, and the iPhone.) “Non, neither the Moroccan nor the Chilean cell phones will work en France,” said the friendly techs at Darty dept store. SO I purchased a fourth phone for local use. “Can you sell me a sim card for the phone?” “Ah! Non, so sorry, for that you have to go to the ORANGE (phone co.) store on the Rue de Rennes.” Half an hour’s walk and 2 miles later, I staggered into the Orange Store, exhausted, ready to cast all my phones in the Seine.

I am home for the summer and Fall. I would be happy to schedule a presentation, either on Moroccan cuisine and culture, or on edible flowers. Short lead times are OK with me! As you know, I have given these to schools, museums, universities, cookbook, garden, and book clubs. Send me an email for information.